Oclean X Pro 2020 Hands-on REVIEW: Why Is That The Smartest Toothbrush?

The first change is the color. The new electric toothbrush comes in only blue color, while the previous version was available in white. Let’s talk about other improvements in this review. 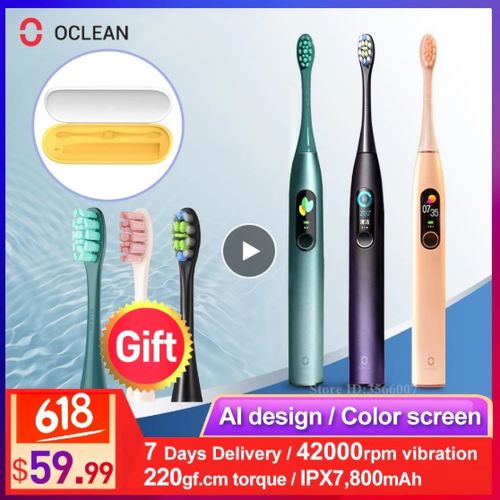 So, the first difference between Oclean X and Oclean X Pro is in the box. The new electric toothbrush comes in a bigger box. However, it also has the image of a toothbrush and main features on the back. 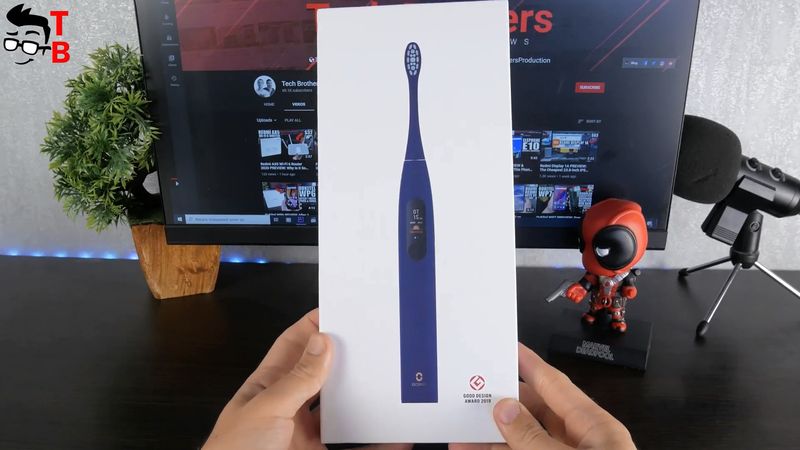 Inside the box, you will find an electric toothbrush on the left side and a 2-in-1 charger and holder on the right. There is also a charging cable and user manual. 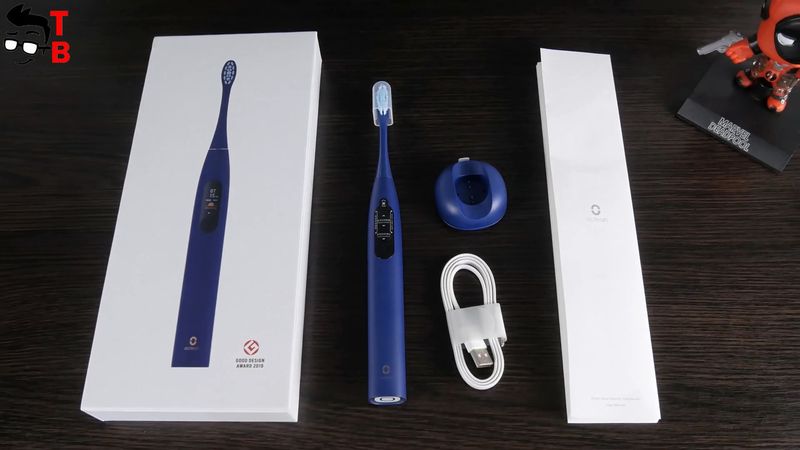 As I already said, the new electric toothbrush from Oclean comes in the new blue color. It is quite unusual because most toothbrushes are white. 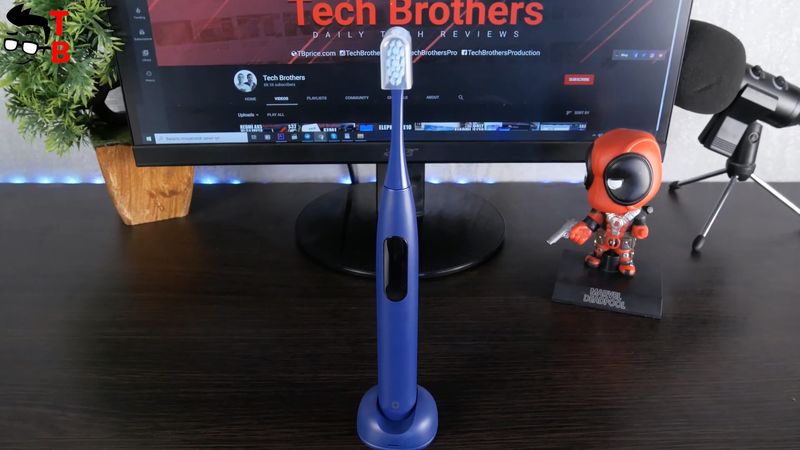 Another feature of Oclean X Pro is a color LCD touch screen. It has a diagonal of 0.96 inches. We will talk about functions, and what we can do using the screen a little later.

There is also a power button under the screen to power on/off the toothbrush. 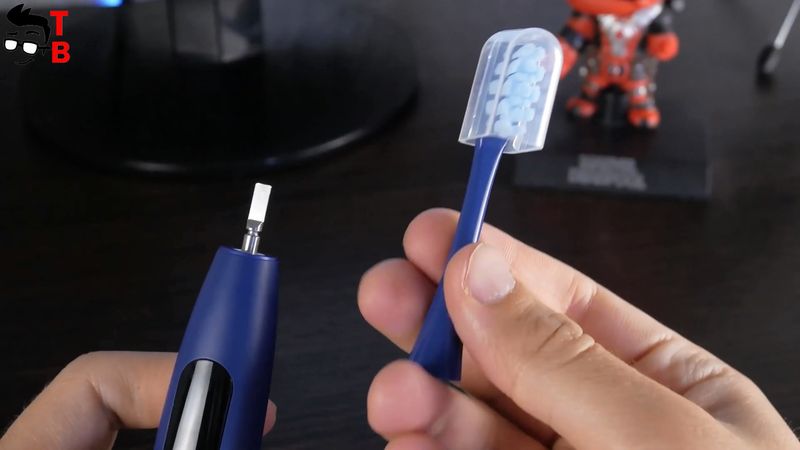 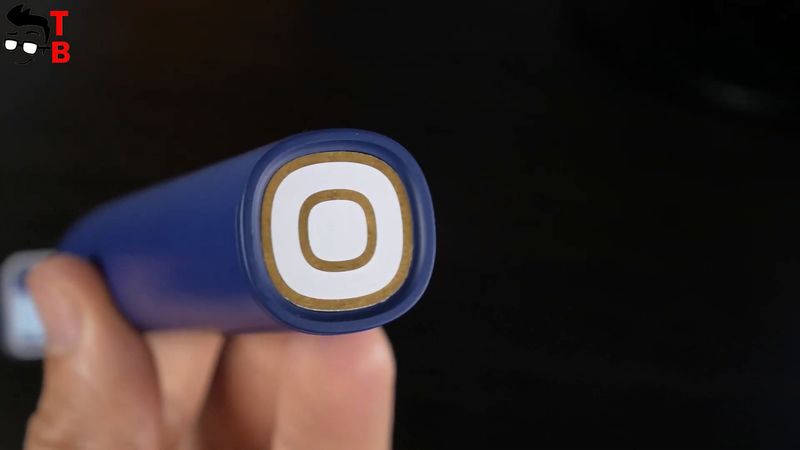 So, I didn’t find any differences between Oclean X and Oclean X Pro in design, except the color. The dimensions, case material, charging method, LCD screen are the same.

The main upgrade of the new Oclean X Pro is inside the case. The new electric toothbrush has a higher frequency – 42000 rpm. The previous version had 40000 rpm. Also, the new toothbrush is equipped with a 6-axis gyroscope that detects brushing motion, and then it provides a report and score about your brush.

As for the battery, it hasn’t changed from the previous toothbrush. Oclean X Pro has an 800mAh battery, while the battery life is about 30 days if you brush the teeth twice a day. 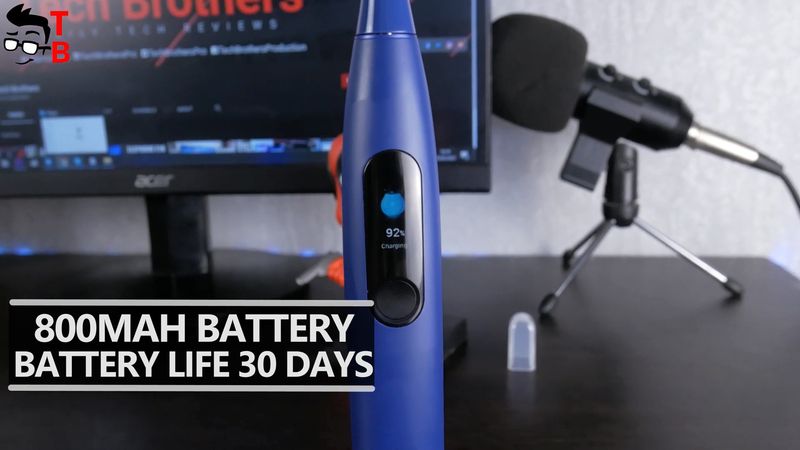 Now, I suggest you look at the screen and its functions.

As I already said, the toothbrush is turned on with a physical button. After that, you will see time, date, and parts of the day: morning, day, or evening. 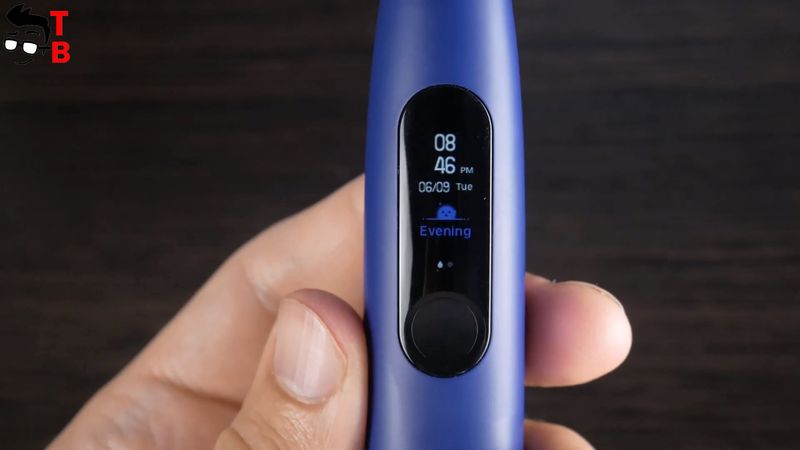 Swipe down or up to see the brushing time, to change brushing strength, brushing mode, zone reminder, and information about a toothbrush. 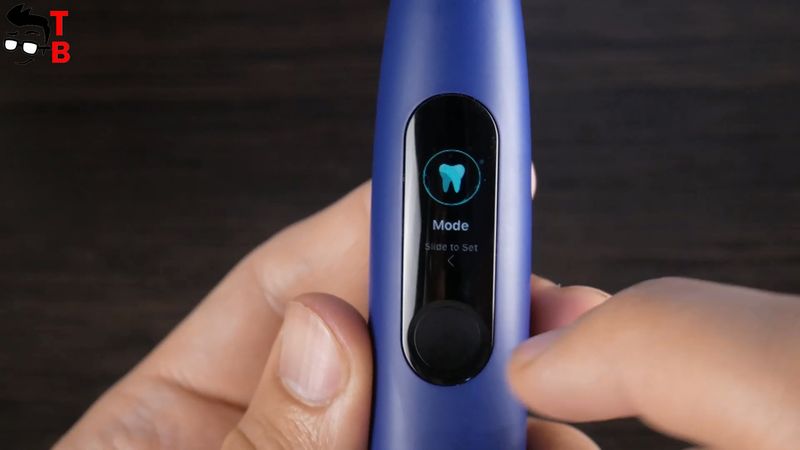 Actually, Oclean X Pro has four modes on the toothbrush: clean, white, massage, and sensitive. When you choose the mode, press on a physical button to active it. 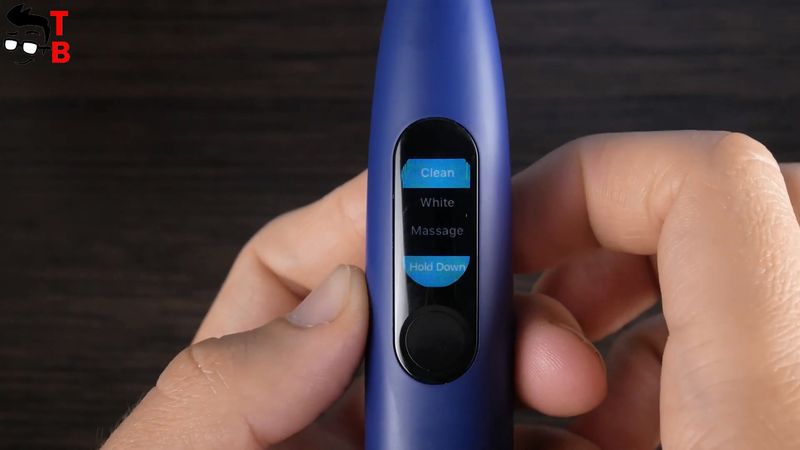 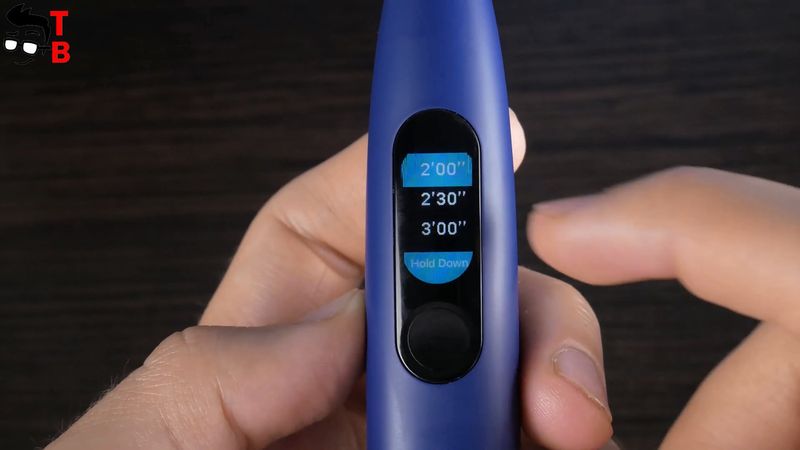 In the brushing time, you can choose the time for your teeth brushing.

OK, now we are ready to start brushing the teeth. Press and hold a few second the physical button. When you brush the teeth, there is information about brushing strength, mode, and left time on the screen. 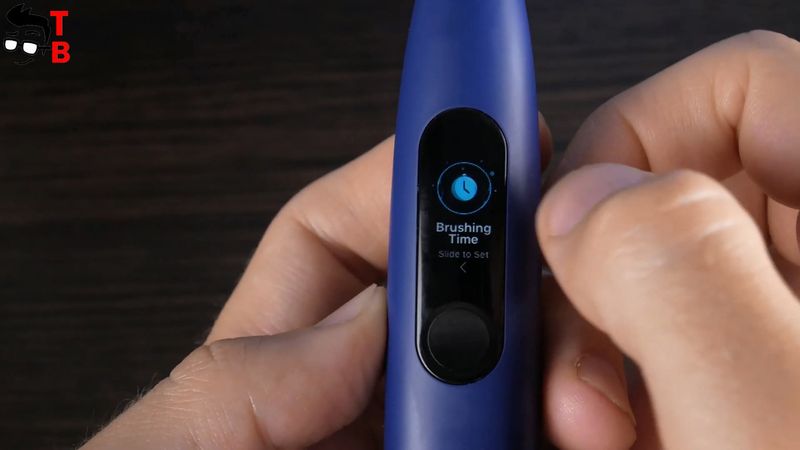 After you have finished brushing, you see the score, time, and blind zone reminder. 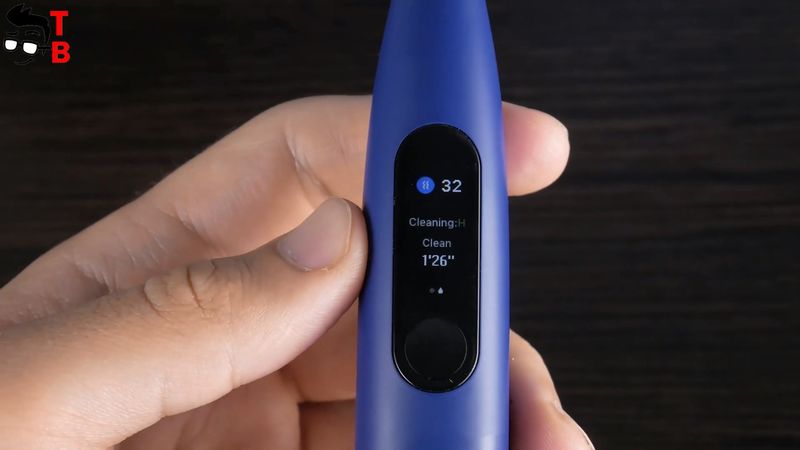 OK, the screen on the toothbrush is very useful. However, if you want more brushing modes, or even create your own mode, then you need to use the app on a smartphone.

The app is called Oclean, and it is available on Android and iOS devices. Actually, it is the same as on the previous electric toothbrushes from Oclean. The new X Pro doesn’t have any new functions. 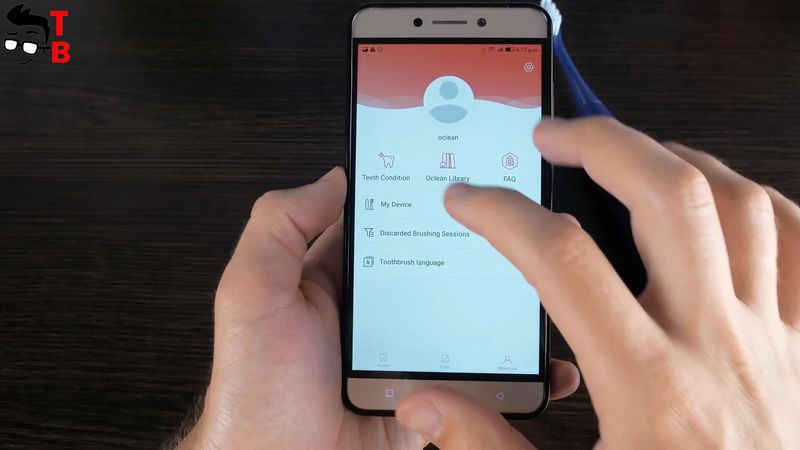 There are about 20 brushing modes, but also you can create your own mode. There is also recommendation for teeth brushing. Tap on Smart Push and enter information about yourself, such as gender, age, habits, and so on. Then you will be offered a brushing mode specifically for you. 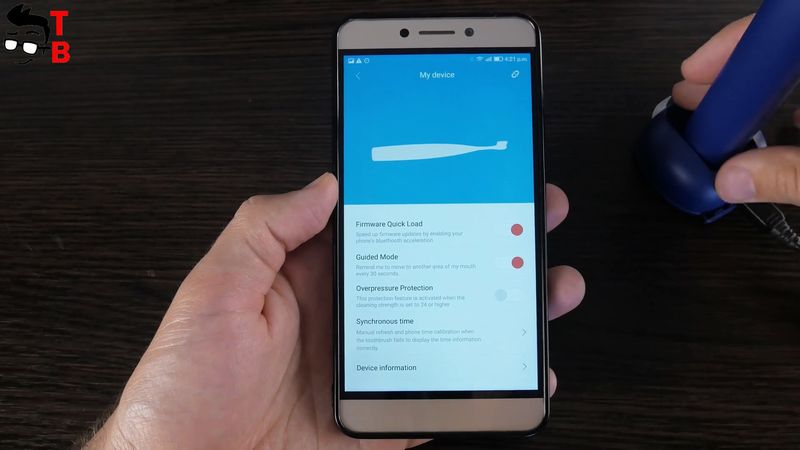 By the way, the app is also used to update the firmware. I often received software updates on the previous Oclean X. I hope that the new electric toothbrush will also have updates.

So, the main updates of the new version of the electric toothbrush are the blue color, LCD screen, and higher frequency. The screen functions, battery, and app on smartphone are the same. 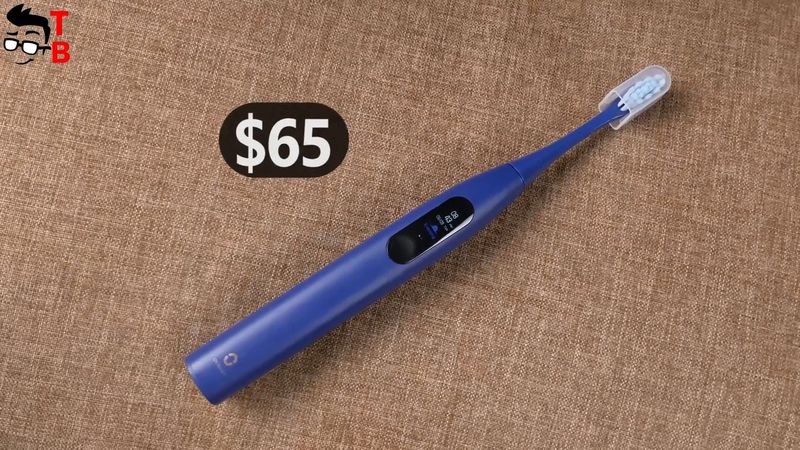 However, the price of Oclean X and Oclean X Pro is almost the same – 65$. So, the new electric toothbrush looks like a good deal. What do you think? Write in the comments below.