Do you remember we made an article about the Charby Pico Gold 65W charger and Charby Sense cable? Today the company is launching a new device – Charby ORBIT. This is a magnetic wireless charger.

Actually, there are two new products: a wireless charger and a mount for the smartphone. Using a special pad, you can quickly mount the smartphone in the bathroom, kitchen, bedroom, or even in the car. 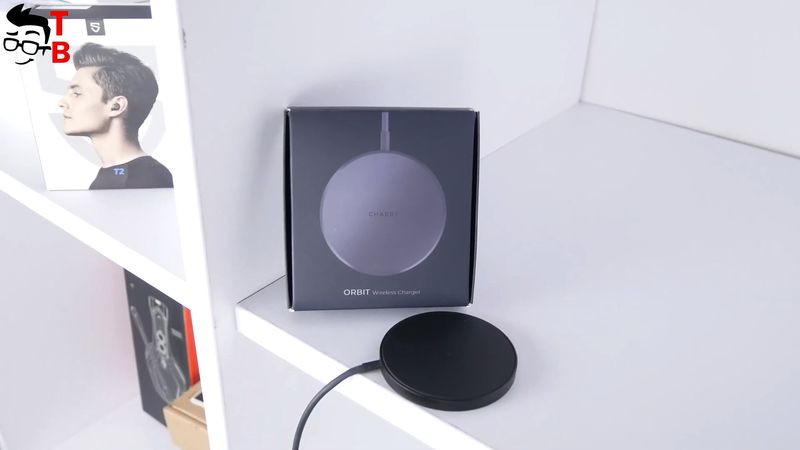 In this article, I will test the ORBIT wireless charger with iPhone 12, but you can use it with previous iPhone models, and even Android devices. The new wireless charger from Charby is compatible with Qi-enabled devices. 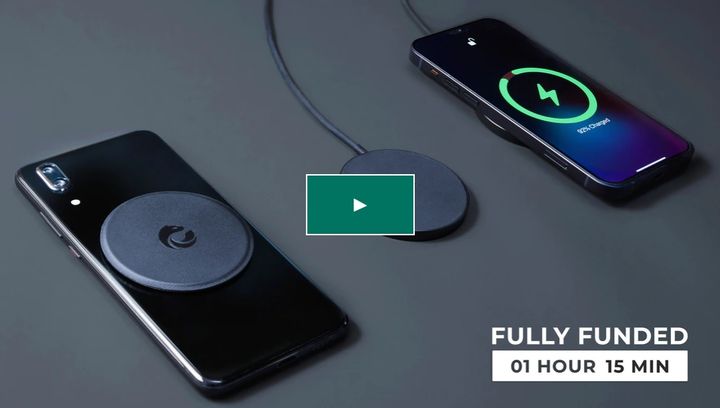 As I already said, Charby has released two new products, so there are two packages: Orbit Wireless Charger and Orbit Pad. 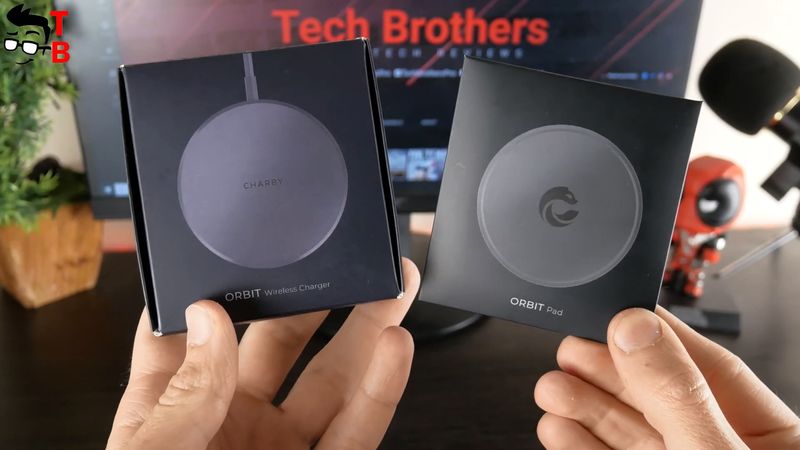 Let’s start with a wireless charger. 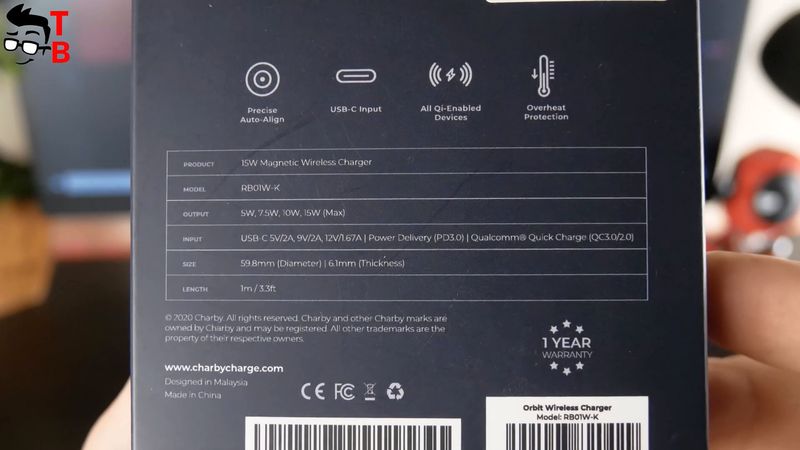 There are main features and specifications of the charger on the back, such as precise auto-align, USB C Input, All Qi-Enabled devices, Overheat protection. 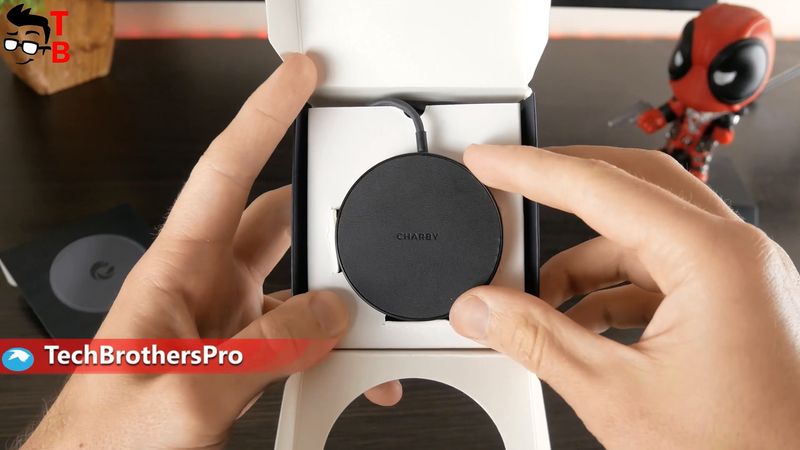 Inside the box, there is a wireless charger itself, greeting card, and user manual. 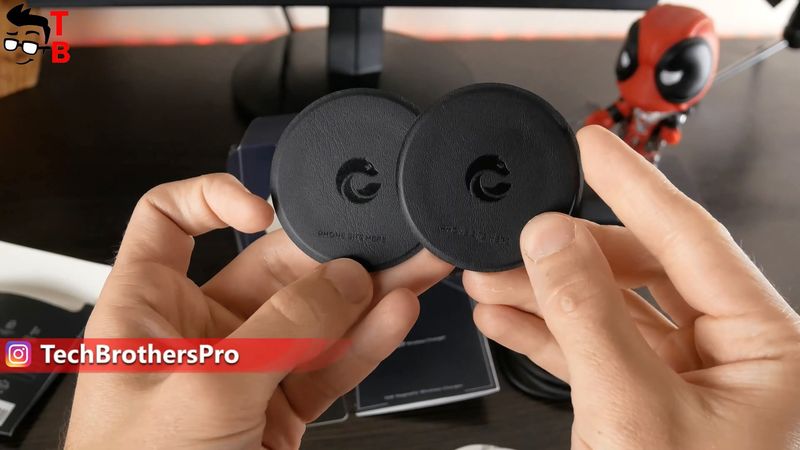 The second new product – ORBIT Pad also has a user manual in the package, as well as two pads, a nano gel pad, 3M tape, and even alignment paper to attach Orbit Pad in the center of the smartphone. 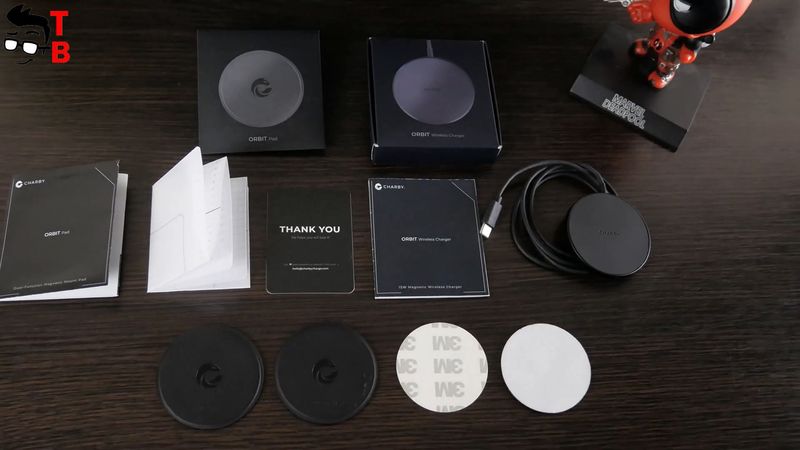 Talking about the design, Orbit wireless charger has an aluminum housing, while the part to which the smartphone is attached is covered with vegan leather. By the way, the vegan leather makes it both scratch and spill resistance. It is also very nice to touch. 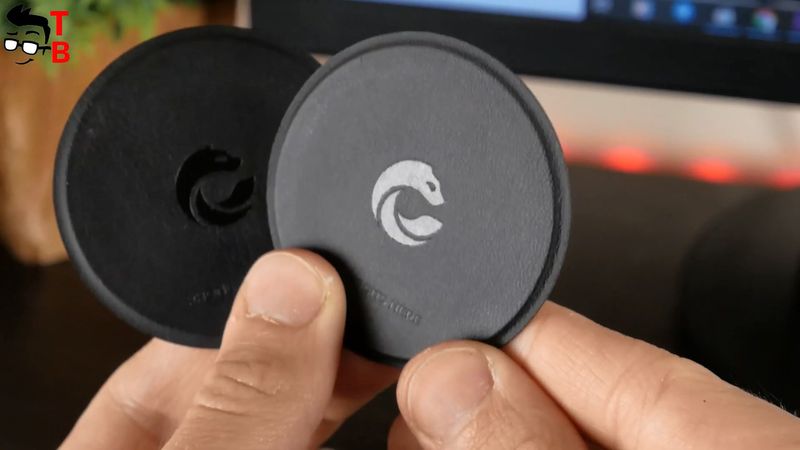 Orbit Pad is also covered by the same vegan leather. The pad is very thin, so it doesn’t stick out on the phone’s back. You can even install the pad on the back of the phone and use a protective case. The magnets are powerful, so a protective case is not a problem. 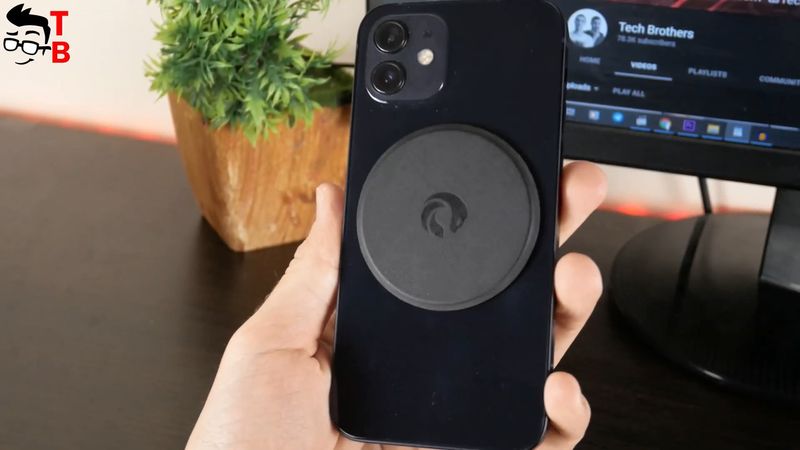 However, the main feature of Orbit Pad is that the pad adds MagSafe magnets to all smartphones. Just stick the pad on the back on your phone, and the magnets will snap an Orbit Wireless charger onto your phone.

How to Use ORBIT Pad

OK, now I want to show you how to properly install the ORBIT pad on the back of your smartphone. 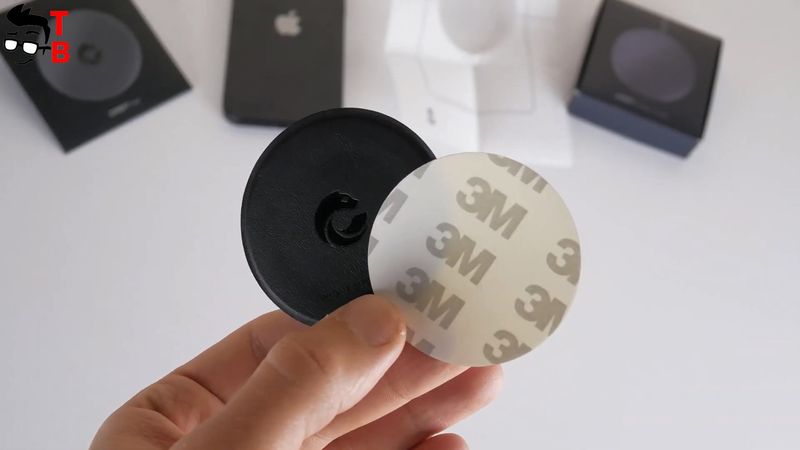 So, you have these two pads in the package. They are the same. One of them you need to install on the back on your phone, while another – on any other surface, such as a bathroom mirror, a kitchen wall, etc.

The first step is to apply 3M tape on the Phone Side of the pad. 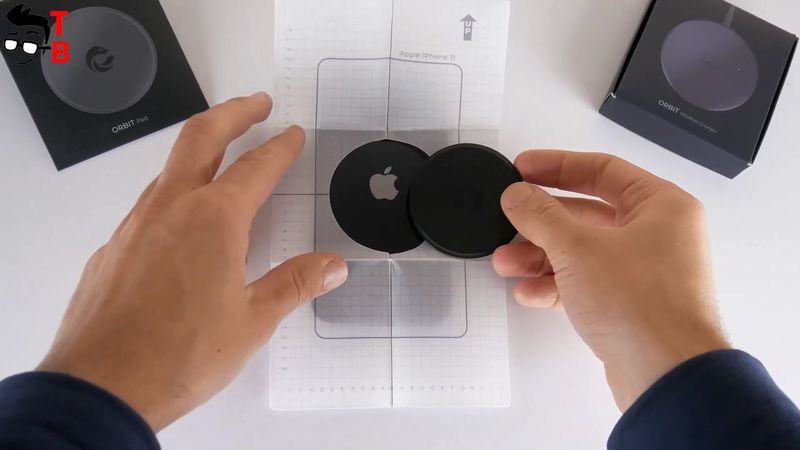 Then, using a special alignment paper, you need to find the center of your phone and attach Orbit Pad through the hole. 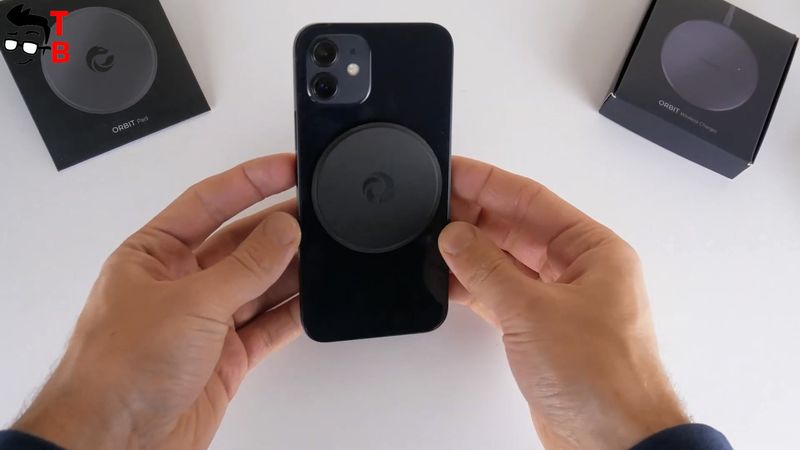 It is very important to find the center of the phone because there are wireless charging coils are located.

Now I want to check the wireless charging speed. I have iPhone 12, and it already supports MagSafe. However, I decided to attach the ORBIT Pad on the back of the phone. 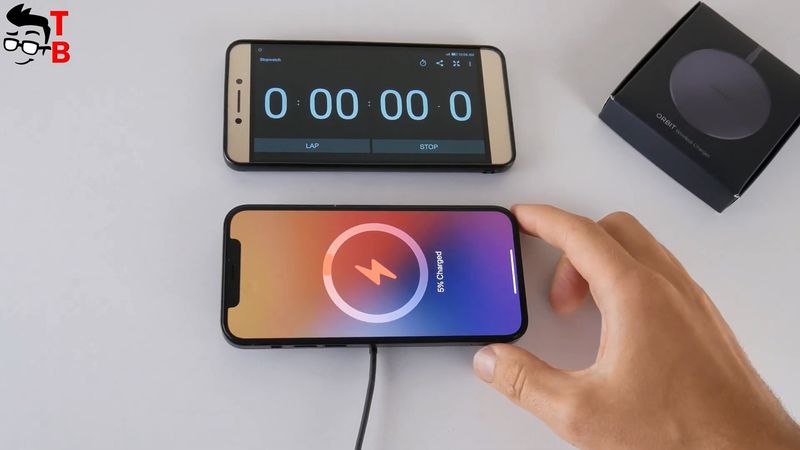 So, I have a 5% of battery level on my phone at the start of charging.

By the way, the maximum power of wireless charging is 15W. Charby Company says that it is 24% faster than Apple MagSafe Charger. 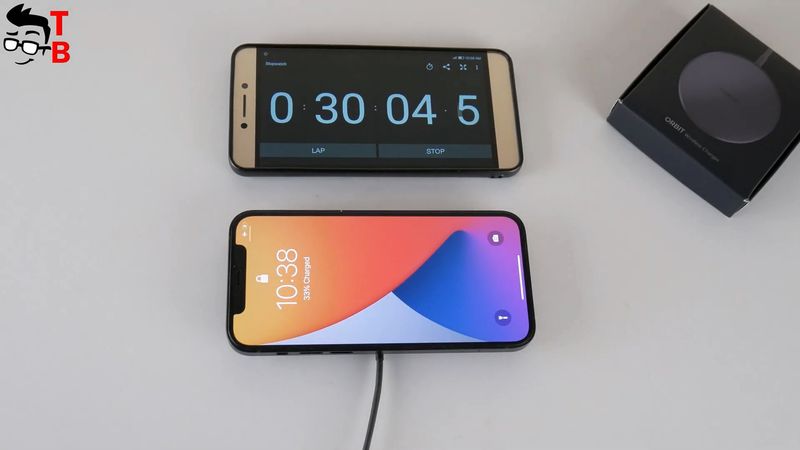 After thirty minutes of charging, the battery level is 33%. 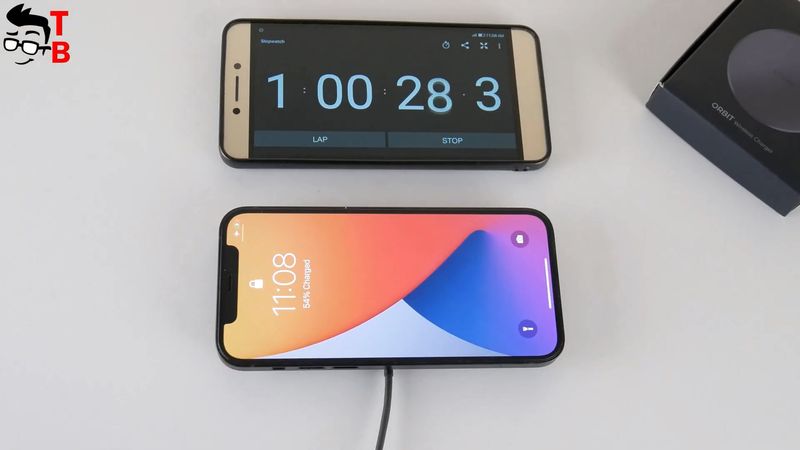 Now, the hour has passed and the battery level is 54%. 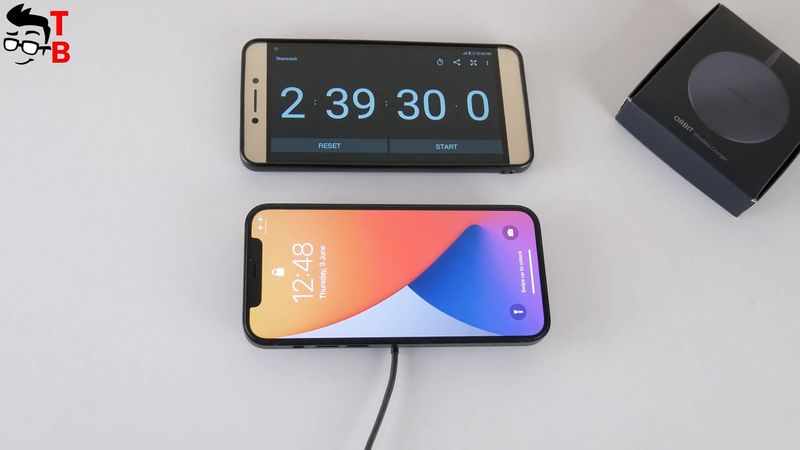 So, the full battery charge from 5 to 100% using Orbit wireless charger took 2 hours 39 minutes. It is fast enough for wireless charging. Do you agree? 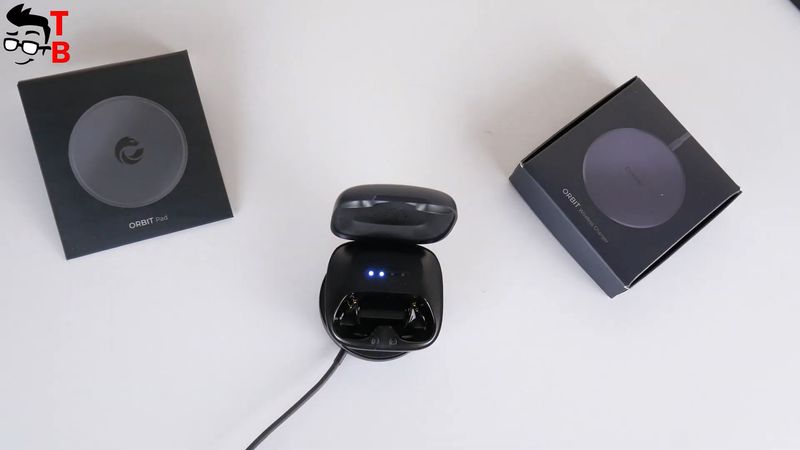 By the way, I also want to test the Orbit wireless charger with a Qi-enabled device. I don’t have an Android smartphone with wireless charging support, but I have TWS earbuds. As you can see, the earbuds really charge. That’s very good. 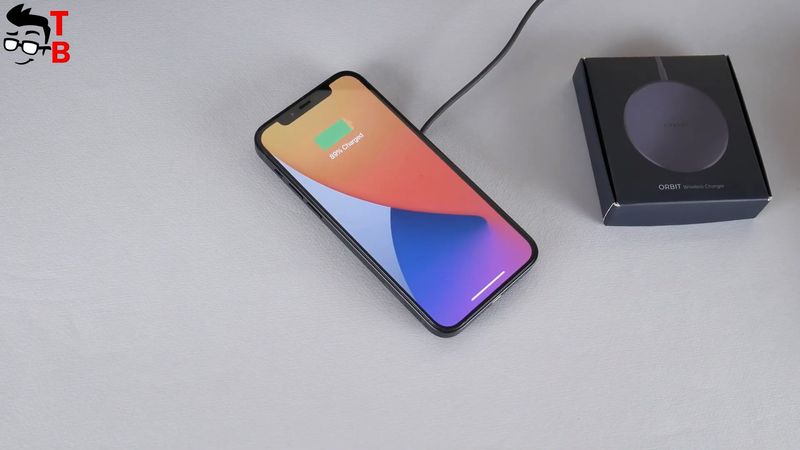 The main task of Orbit Pad is to add MagSafe magnets to all smartphones, such as iPhone 11 or even previous models, as well as Android devices with Qi wireless charging support. 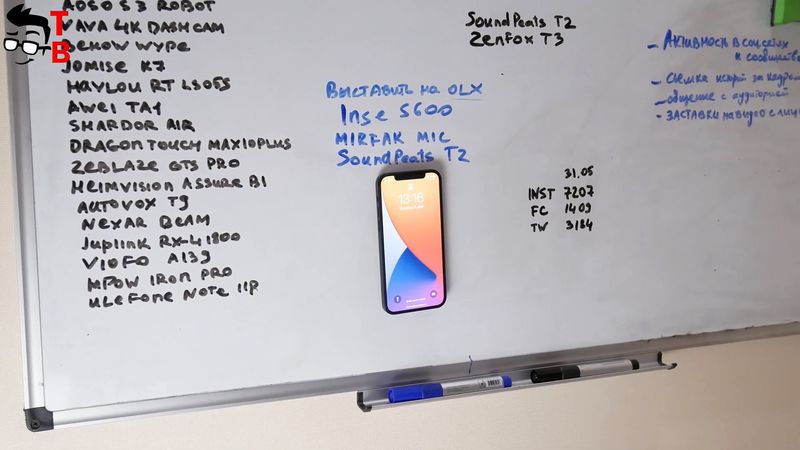 Orbit Pad also helps to attach the smartphone to any surface. It is really convenient.