We have tested many backup cameras from Auto Vox Company on our channel Tech Brothers, but the new one looks something new. It is called Auto Vox W10, and it is mainly intended for trucks, vans, or trailers.

By the way, this is a wireless back up camera, so you don’t have to pull the cable between the monitor and the camera through the car cabin. The signal can reach 150 feet, or 45 meters, so it is really good for trucks, campers, vans, bus, etc. 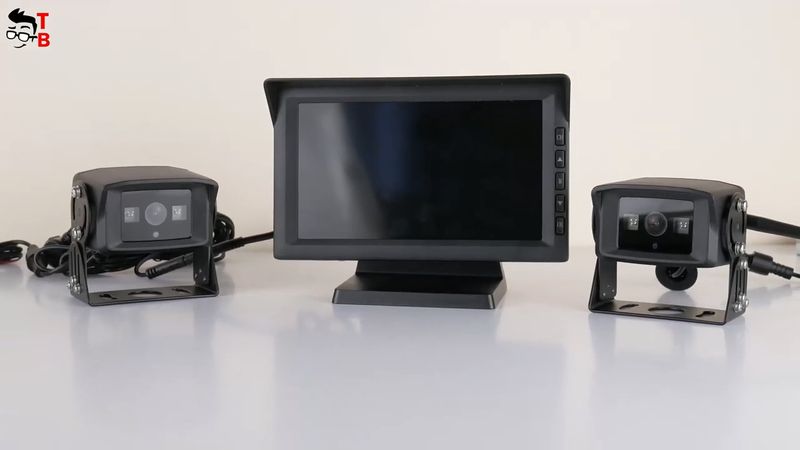 You can also buy the second camera in addition, and use it as a security system. The monitor supports two channels in real time.

Okay, let’s do unboxing, and then look at design, installation, and image quality of the camera. 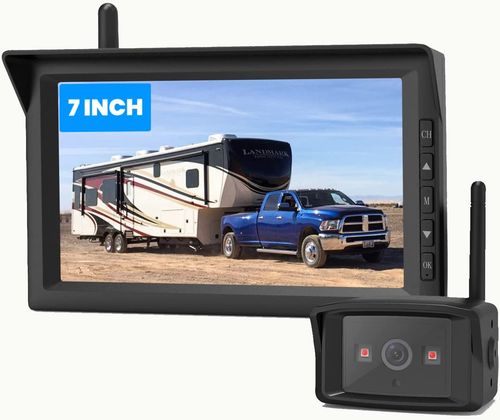 So, I have three boxes. The first one is Auto Vox W10 backup camera. 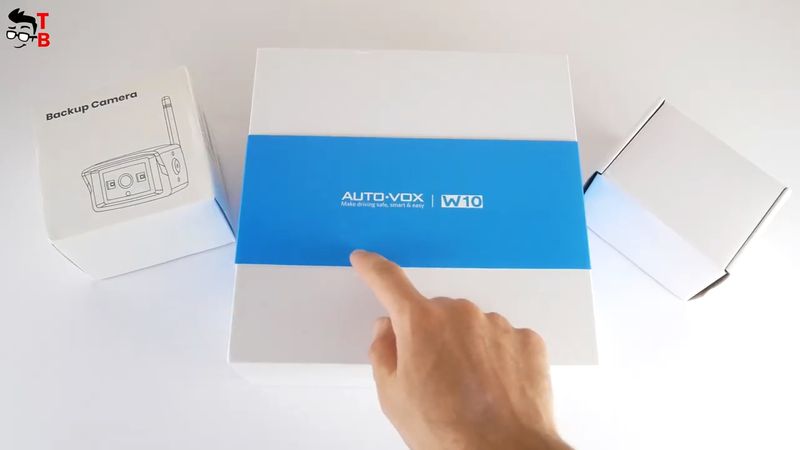 This one is the second camera.

You can also buy an extension antenna for backup camera. The antenna increases the range up to 66 feet. 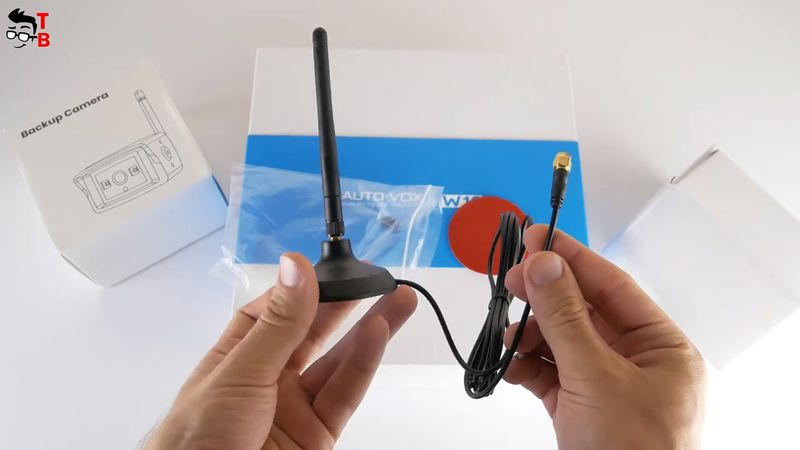 In the box, there is a removable antenna, and a magnetic base.  If you cannot find a metal surface in your car, then you can use an adhesive tape to install the antenna. 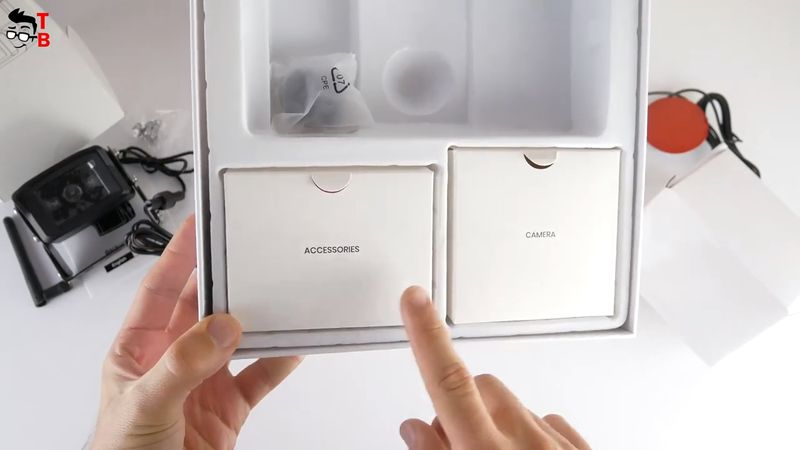 In the box with the second camera, there is a user manual, the camera itself, antenna and two screws.

Finally, let’s open the main box with Auto Vox W10 back up camera. 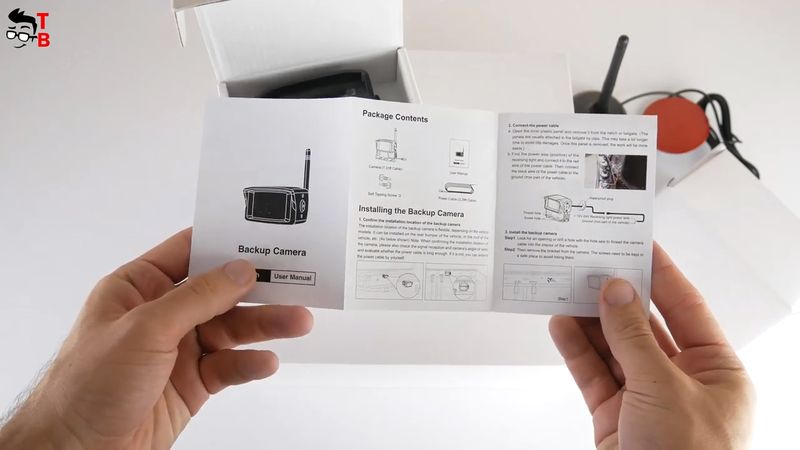 First, there is a user manual in English. You will most likely need it to read how to install the camera. 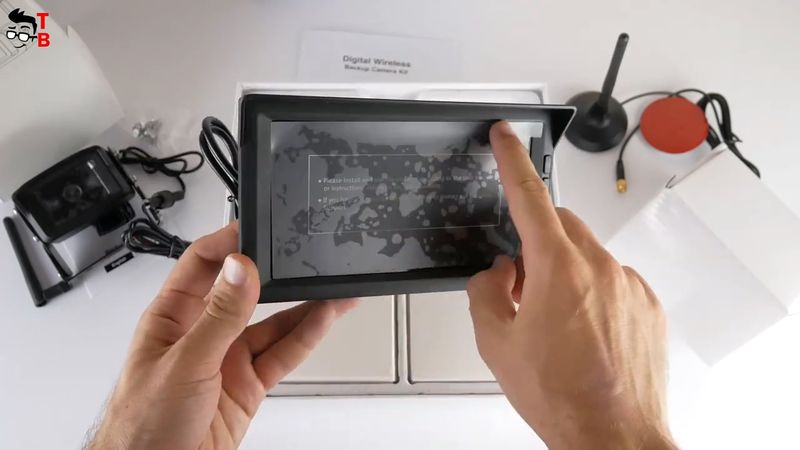 Then, we have a big 7-inch monitor.

The inscription on this box says there is a camera inside. It is really so, as well as removable antenna. 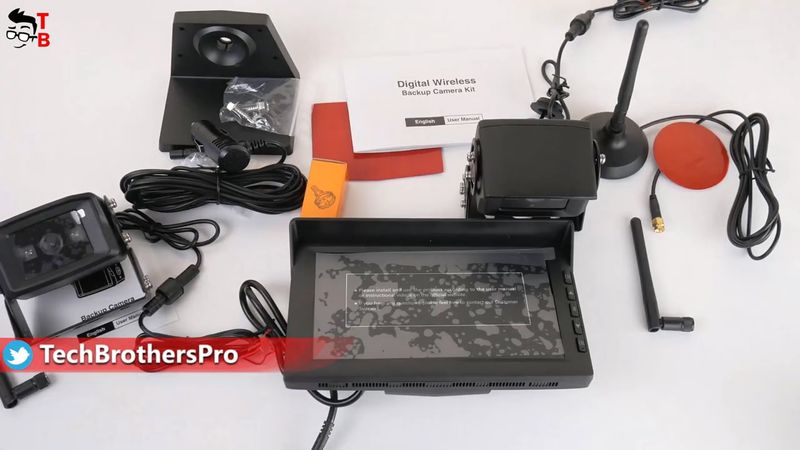 In the next box we have different accessories, such as mount holder for monitor, self-tapping screws, car charger, hole saw, and adhesive tape.

Okay, there is a lot of stuff here, and it is all necessary.

Let’s take a closer look at the monitor. 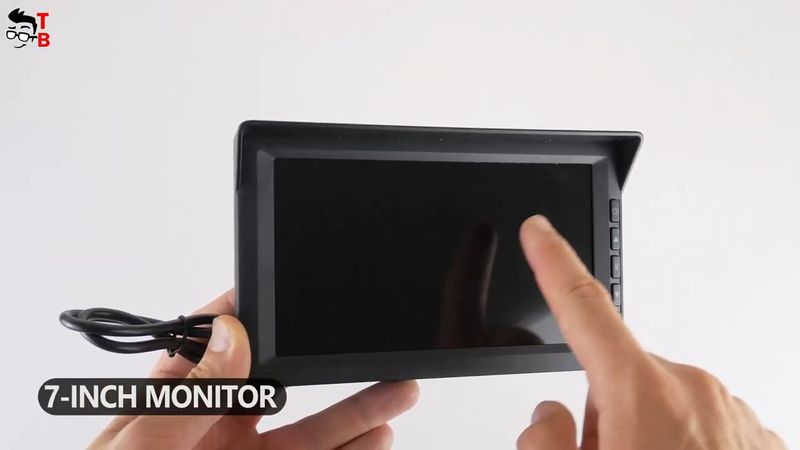 You know, it is bigger than the monitors of some other backup cameras. It has a diagonal of 7-inches and HD 720p resolution. The maximum brightness is 500 cd2/m. The transmission frame rate is 25fps. 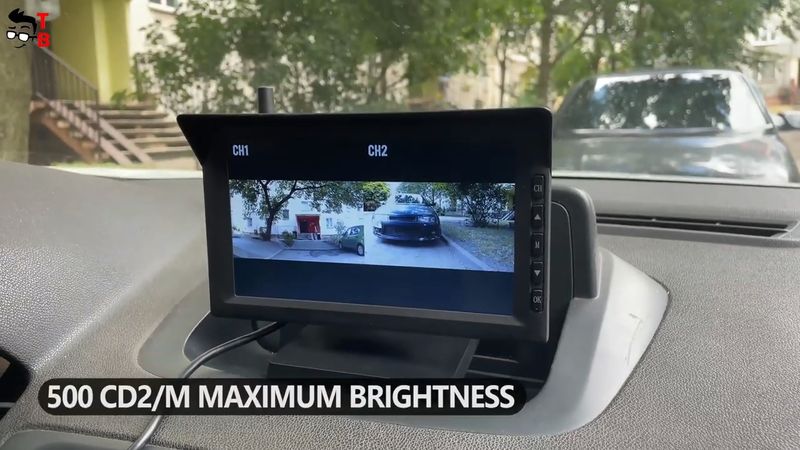 There is a power cable to connect to the cigarette lighter, and a mount for antenna. 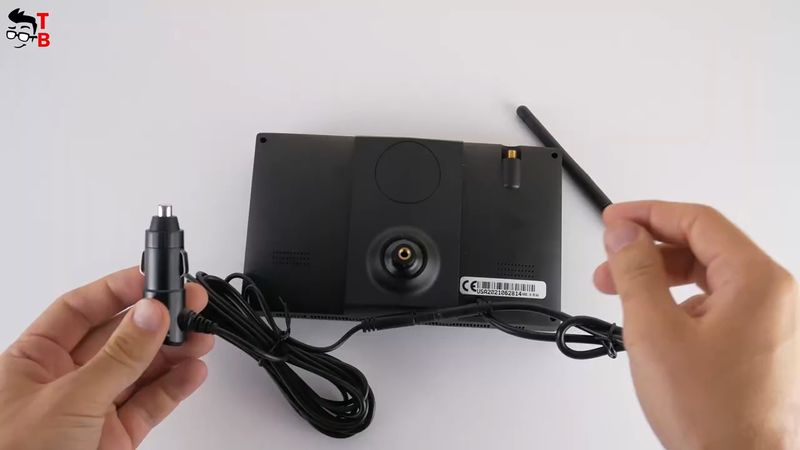 We can also see a bracket in the center to install a monitor to the mount holder. 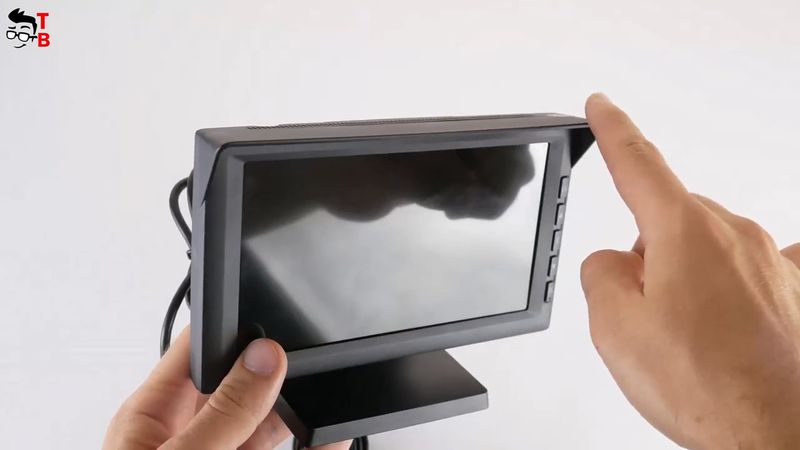 By the way, I think the visor on the front is designed to keep the sun from shining on the monitor, right? It is a very good idea. 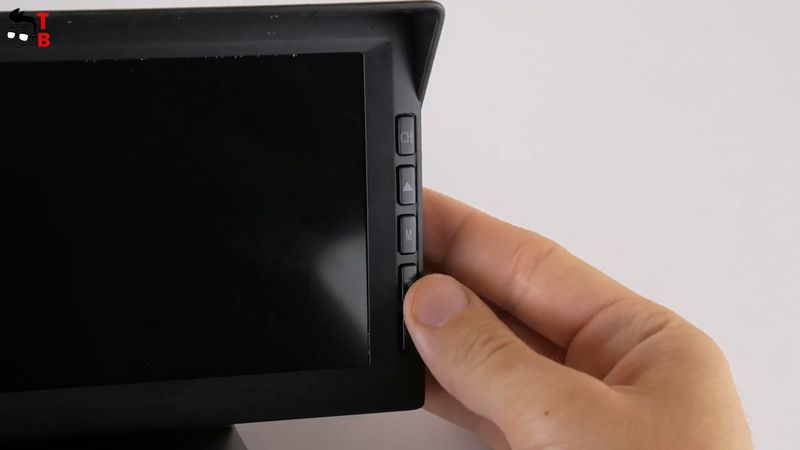 There are physical control buttons to the right of the monitor, but we will talk about them a little later. 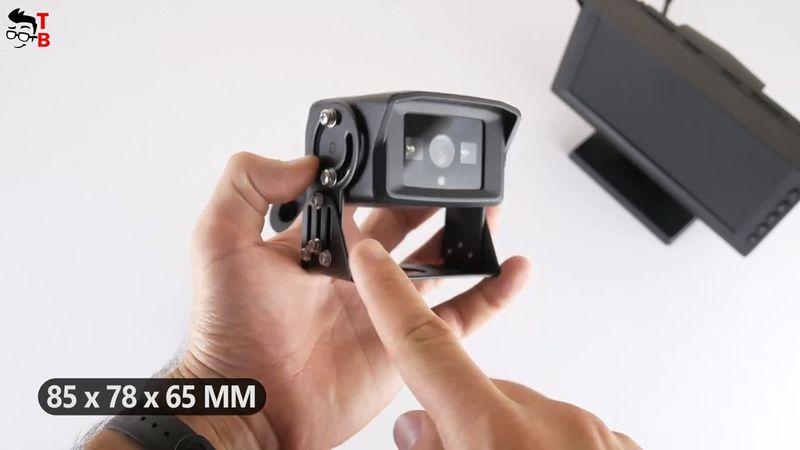 As for the camera, it is very impressive, because it is big and heavy. The dimensions of the camera with the bracket are 85 by 78 by 65 mm. The weight is 350 grams. 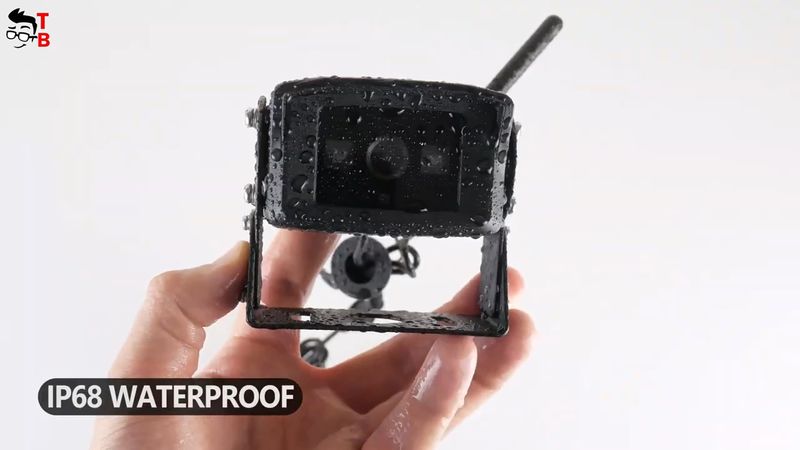 You know, it is so heavy, because it is waterproof and durable by IP68 rating. The working temperature of it is from -20 degrees Celsius to 65 degrees Celsius. 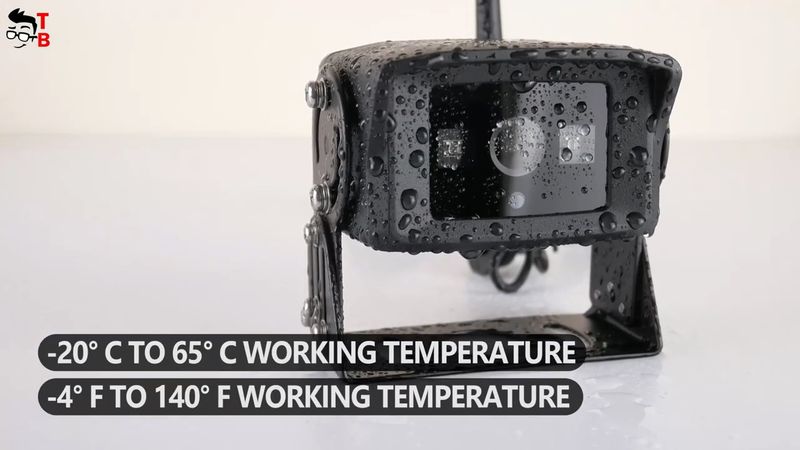 The camera has a mount for antenna on the back. 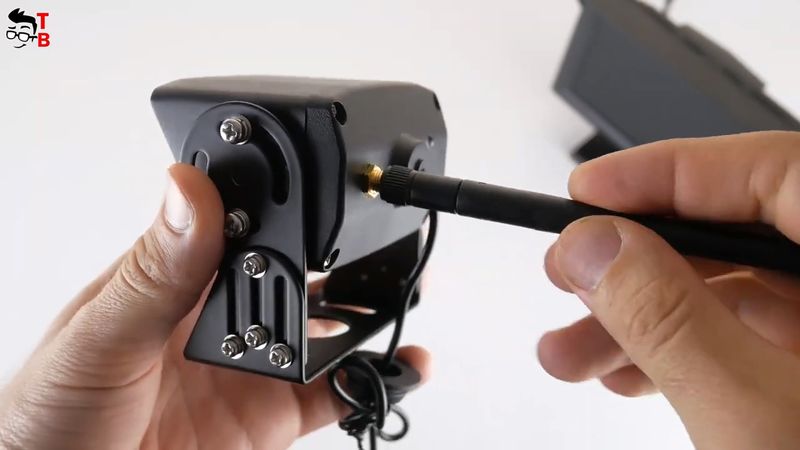 On the front, there is a camera lens and two powerful infrared lights for night vision.

By the way, the second camera, which is sold separately, is the same as the main one.

You know, it is very fast and easy to install a monitor in the car cabin, because you just need to mount the monitor to the holder, and then use 3M tape to install the holder to the dashboard in your car. That’s all! 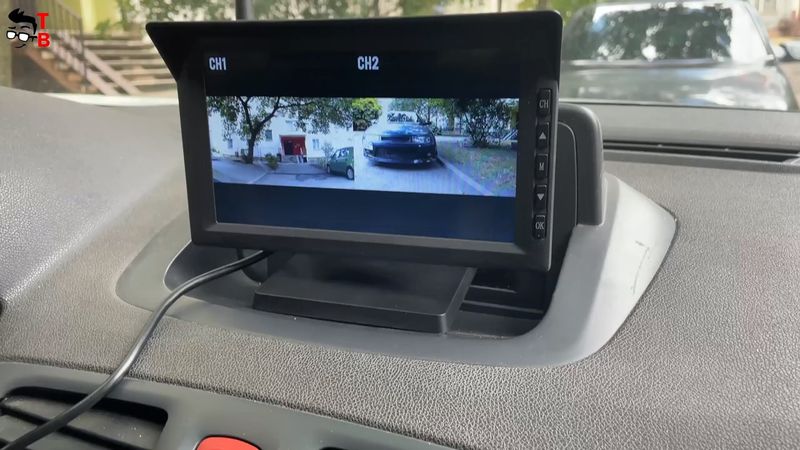 As for the camera, it is not that simple. First, you need to find a location for the backup camera. Make sure that signal between the monitor and camera is good. 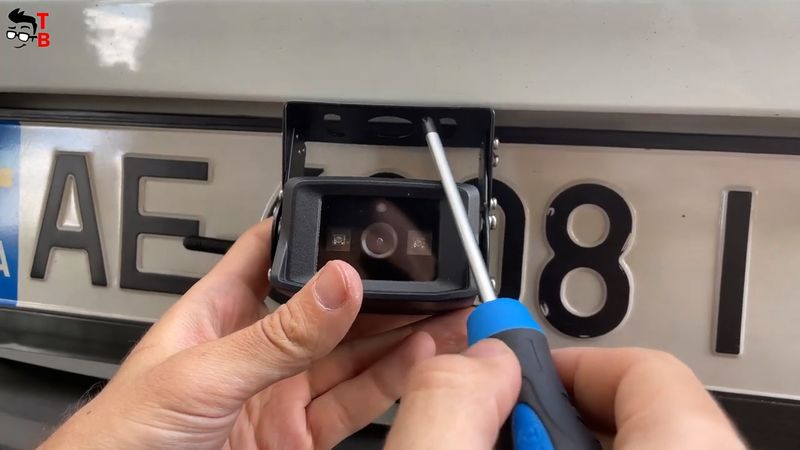 As I already said, the camera is quite heavy, so you cannot install it with adhesive tape. You need to use the electric drill or other professional equipment to install the camera bracket on the vehicle with self-tapping screws. 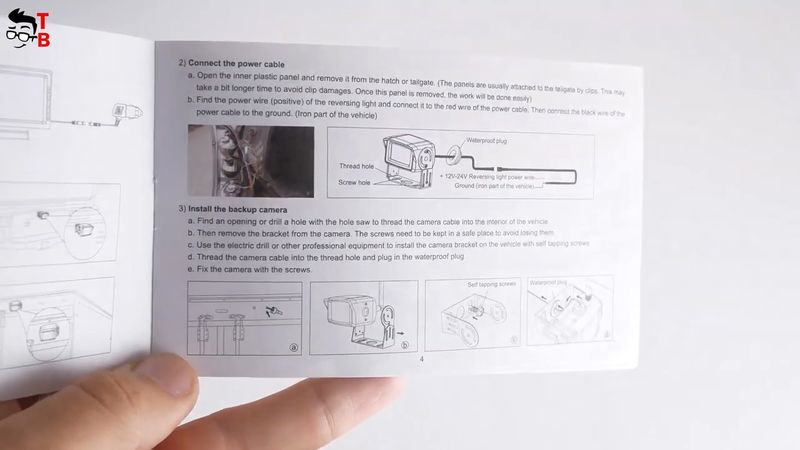 Then, you need to find a power wire of the reversing light and connect it to the red wire of the power cable. The black wire should be connected to the ground.

So, the cameras and monitor are installed, and we can look at the screen menu. 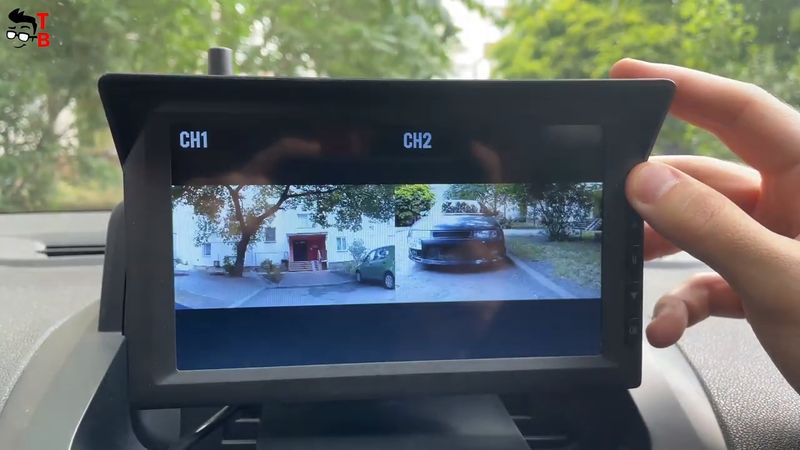 First, we can press on the channel button to switch between the first, the second and both channels. 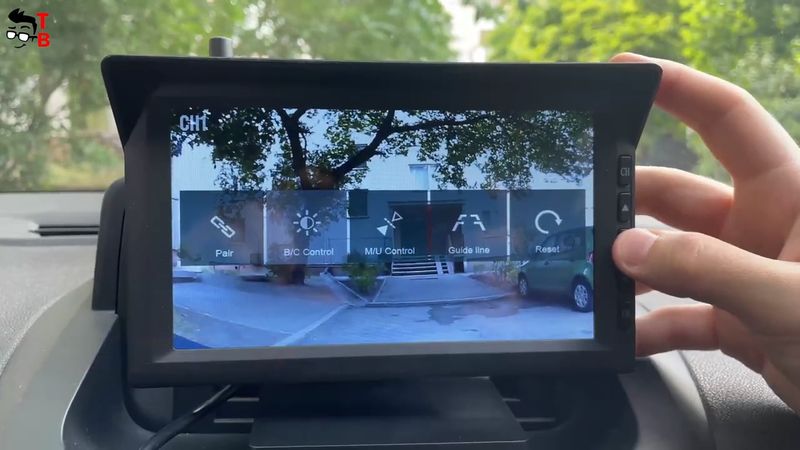 In the settings menu, you can pair the second camera, but in my case, it was connected automatically. 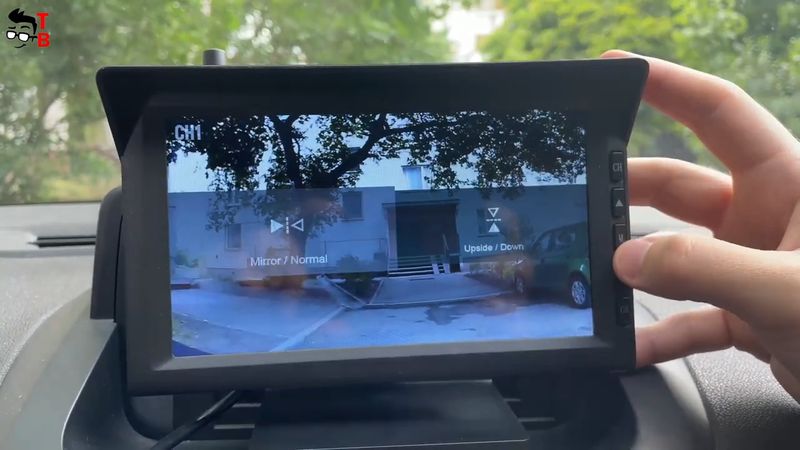 Then, you can change a screen brightness and contrast.

You can also flip a camera view in four ways, such as mirror and normal, upside and down.

Most likely, you have already noticed that Auto Vox W10 has guidelines. However, if you don’t need them, you can turn them off.

The last function is Reset.

Talking about image quality, it is really good. As I already said, a camera captures video in 720p resolution and 25fps. The viewing angle is 135 degrees. 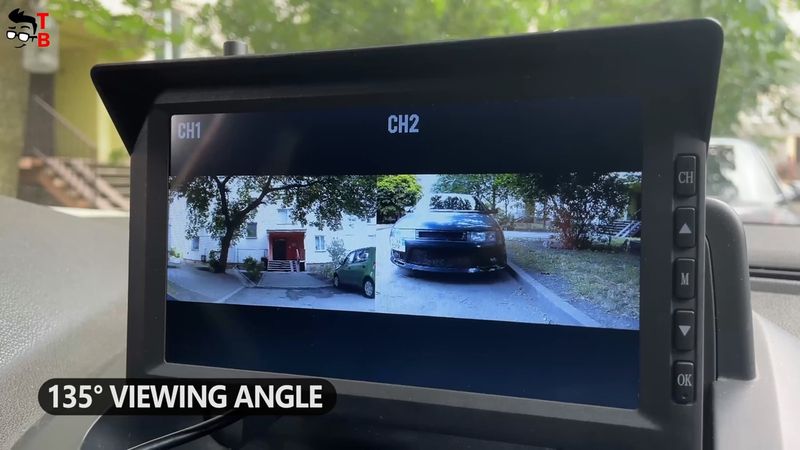 However, please, do not confuse the backup camera and dash cam. AUTO VOX W10 doesn’t have a video recording function and even a storage. 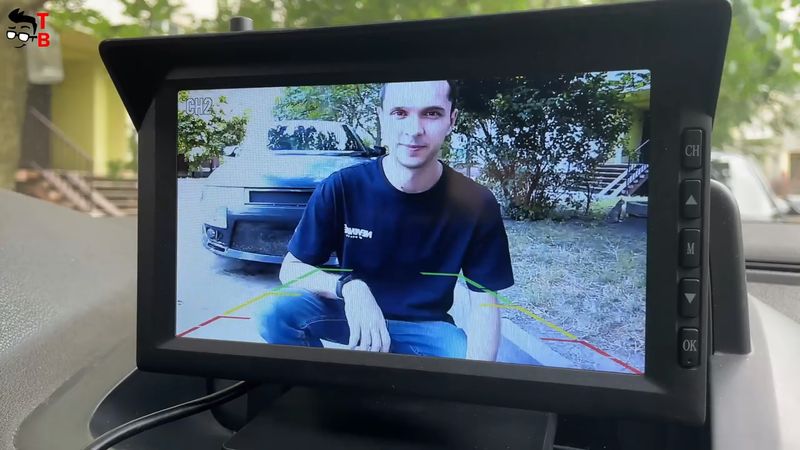 You can only watch a video in real time.

So, you know, my opinion is that AUTO VOX W10 is a good backup camera for the large vehicles such as trucks, vans, trailers, etc. However, it is not very suitable for the passenger cars, because you have to drill holes in the body to install the camera.

The signal is very strong – up to 150 feet in open area. However, the manufacturer recommends using this wireless backup camera for vehicles under 40 feet. If you vehicle is bigger, then you need to buy an additional extension antenna. The price of it is only $20. 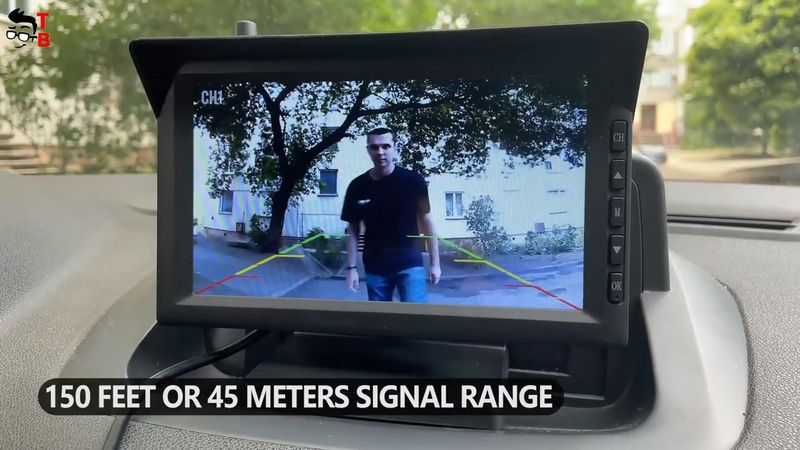 The image quality of the camera and monitor are very good.

By the way, you can use this backup camera not only for reversing, but also for security. It can be very useful while the trucks and trailers are parked.