Today I want to tell you about the must-have device for video content creators. You know, every creator will tell you that the quality of sound in a video plays a more important role than the quality of the video itself. 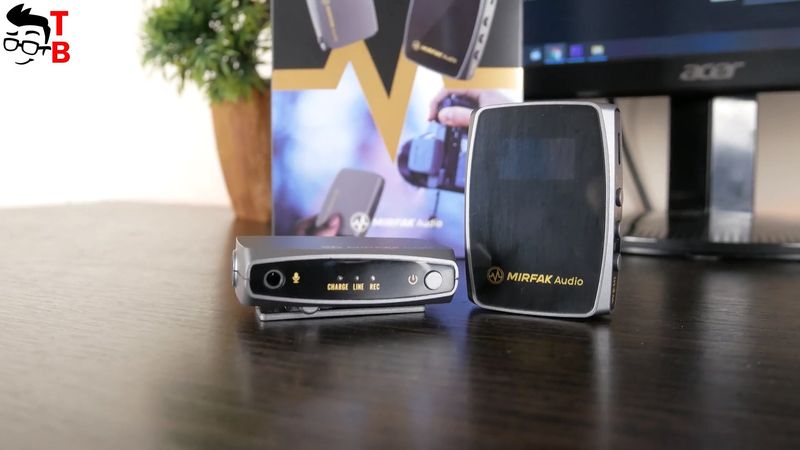 I have the new compact wireless microphone system called Mirfak WE10. There is a microphone itself and a receiver. The connection between them is made through the 2.4Ghz frequency band. The receiver has a multi-function screen, while the microphone is equipped with an SD card slot.

Okay, let’s talk about Mirfak WE10 in detail, its features, and of course test the microphone quality. 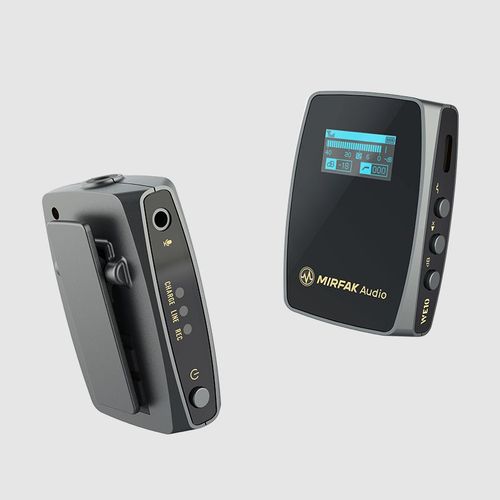 So, on the box of Mirfak WE10, we can see the microphone and receiver. 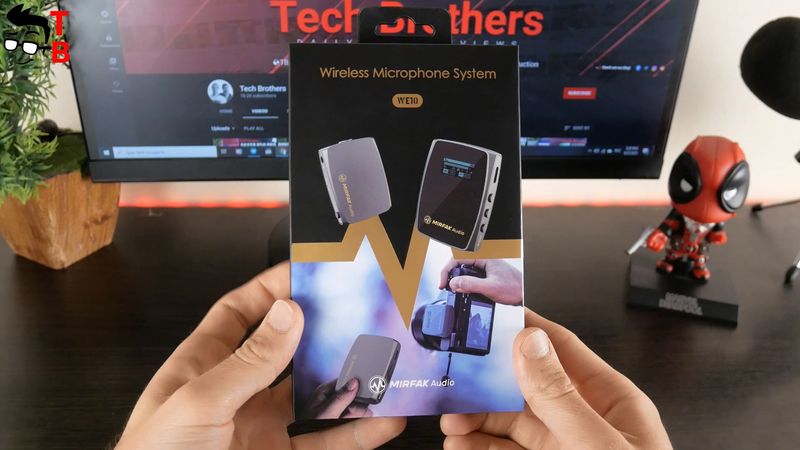 On the back, there is a packaging list and main features. I will show you the package contents a little later, but now let’s talk about the main features. The first feature of this microphone system is a 2.4GHz wireless connection.

There is the support of a 3.5mm input jack for external microphones. Also, you can use a microSD card slot for audio recording.

The wireless receiver has an OLED screen.

Compact design for installation on cameras and mobile devices, and many other features. Inside the box, we have a transmitter, receiver, lavalier mic, camera cable, phone cable, and charge cable, windshield, a storage pouch, and user manual.

The receiver and transmitter are made of the same plastic material and the same colors. Both of them have clips on the back.

The main difference between receiver and transmitter is that receiver has a black front side with an OLED screen. Also, it has a power button, 3.5mm microphone jack, and 3.5mm headphone jack. On the right side, there is a USB Type-C port, low-cut button, mute button, and gain button. Other the other side is the recording switch, microSD card slot, and USB Type-C port. Transmitter has a built-in microphone on the top, but you can use an external microphone. 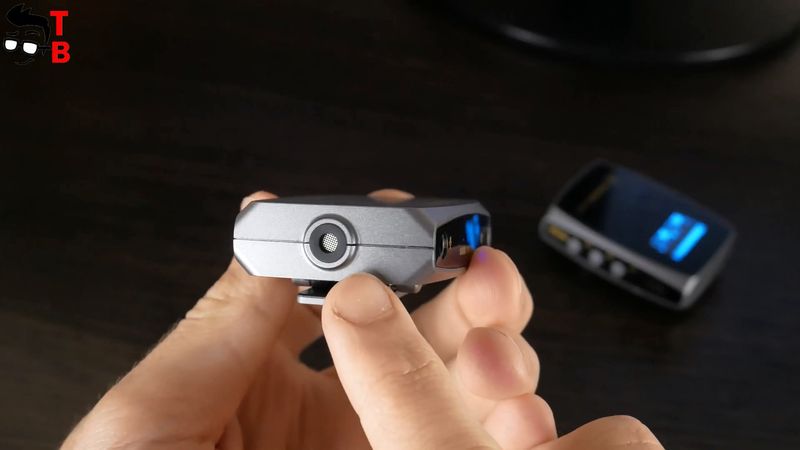 Now, let’s go to the official website, and look at the specifications of the Mirfak WE10 wireless microphone system. 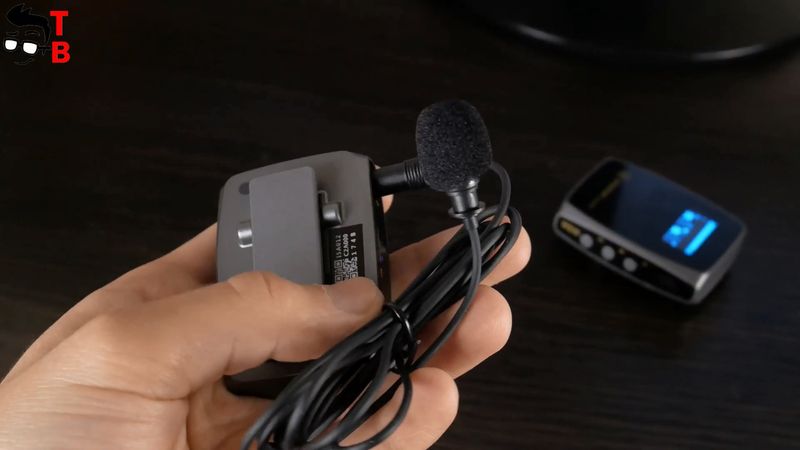 As I already said, the new wireless microphone system uses a 2.4GHz transmission type. The operating range is up to 30 meters.

Talking about battery life, it is 3.5 hours of transmitter and 4 hours of the receiver. The transmitter has 500mAh built-in battery, and it takes 100 minutes to fully charge.

The receiver is equipped with a 350mAh battery, and it is fully charged in 80 minutes.

You can also see the technical specs of the microphone, such as frequency range, sensibility, noise signal ratio.

By the way, the recording format is 96kbps MP3.

The connection of transmitter and receiver is very simple. You just need to press the power button on the receiver and then triple-press to enter code-matching mode. Do the same on the receiver. 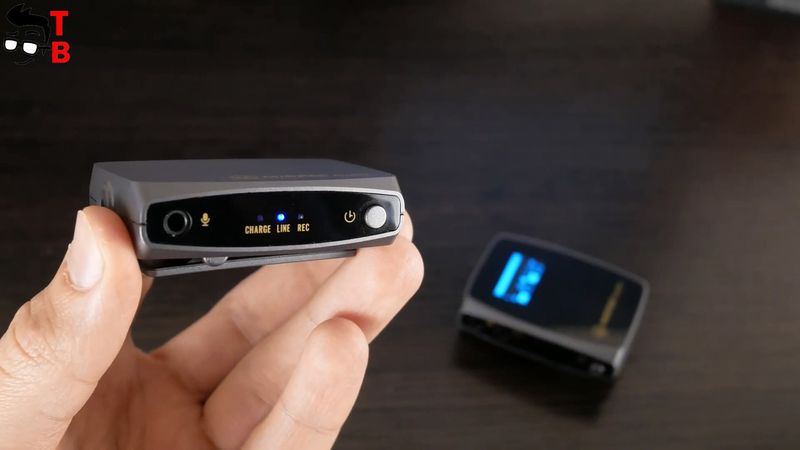 Wait a little, and you will see that the Line indicator is blue.

Okay, time to check the quality of the microphone. I will insert a microSD card in the transmitter and record the sound on the memory card. First, I record the sound on the built-in microphone, and then I plug in the external lavalier microphone that comes with the package. Hey, guys! I am testing Mirfak WE10 right now, and this sound is recorded on the built-in microphone. One, two, three – one, two, three. By the way, the microphone is about 10 centimeters away from my mouth. 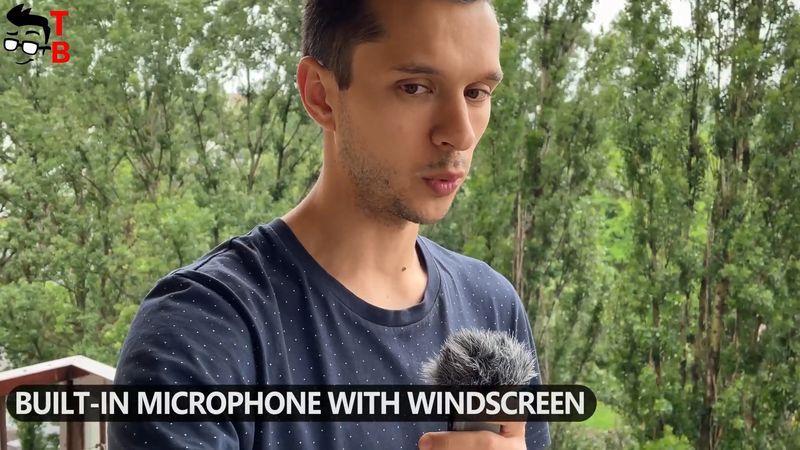 You know, there is also a furry windscreen in the package of the Mirfak WE10 wireless microphone system. I decided to test the quality of the external microphone with a windscreen. I played the video with background noise on my computer, and now you can compare the sound quality with furry windscreen and without it.

Mirfak WE10 looks like a professional device, but it is a must-have for all, who want to record the video with high-quality sound. This wireless microphone system is perfect for content creation, filmmaking, on-camera and onstage presentations, vlogging, live-streaming, etc. You know, I don’t have 3.5mm audio input on my camera, so it is very hard for me to find a good microphone. However, Mirfak WE10 has a microSD slot, so the sound is recorded on the memory card. That’s very good.

The sound quality is good on both internal and external microphones. By the way, I have tested different settings on the receiver, and I found that the best sound is in -6 gain.